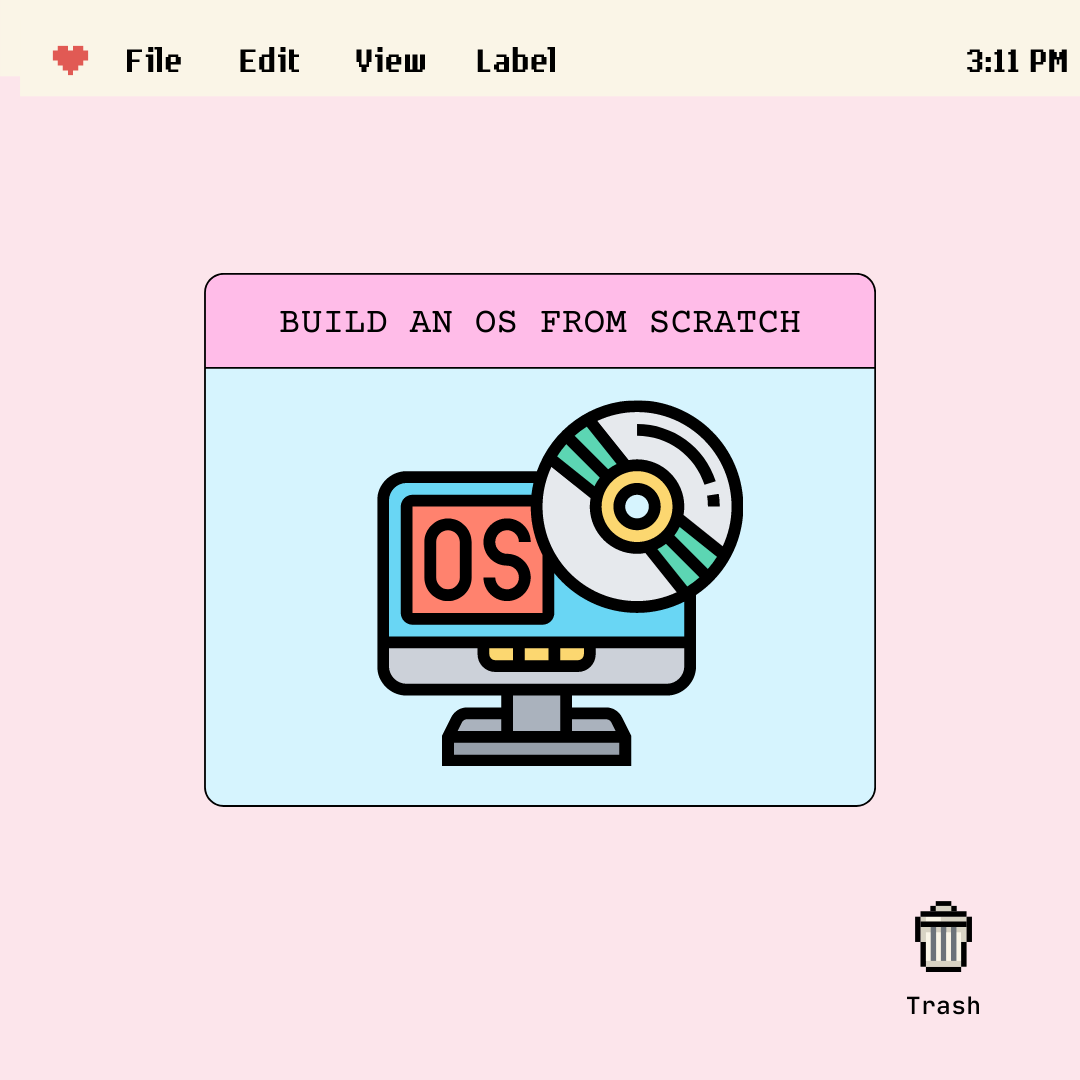 How many times have you read an OS book but not been able to code one?Operating System (OS) books are tedious, but only theory makes it hard to understand how an OS actually works. Here is my attempt to write a simple OS and document some of the concepts learned.

On a mac, install Homebrew and then brew install qemu nasm

On some systems qemu is split into multiple binaries. You may want to call qemu-system-x86_64 binfile

For testing these low-level programs without continuously having to reboot a machine or risk scrubbing your important data off a disk, we will use a CPU emulator QEmu.

I'm working on a Mac (with M1 chip). QEmu has some issues with M1 chip, so you can run these experiements inside a docker container. `docker run -it ubuntu bash`.

When we start our computer, initially, it has no notion of an operating system. Somehow, it must load the operating system --- whatever variant that may be --- from some permanent storage device that is currently attached to the computer (e.g. a floppy disk, a hard disk, a USB dongle, etc.).

Booting an operating system consists of transferring control along a chain of small programs, each one more “powerful” than the previous one, where the operating system is the last “program”. See the following figure for an example of the boot process:

When the PC is turned on, the computer will start a small program that adheres to the Basic Input Output System (BIOS) [16] standard. This program is usually stored on a read only memory chip on the motherboard of the PC. BIOS is a collection of software routines that are initially loaded from a chip into memory and initialised when the computer is switched on. BIOS provides auto-detection and basic control of your computer’s essential devices, such as the screen, keyboard, and hard disks.

Note: Modern operating systems do not use the BIOS’ functions, they use drivers that interact directly with the hardware, bypassing the BIOS. Today, BIOS mainly runs some early diagnostics (power-on-self-test) and then transfers control to the bootloader.

Boot Sector
BIOS cannot simply load a file that represents your operating system from a disk, since BIOS has no notion of a file- system. BIOS must read specific sectors of data (usually 512 bytes in size) from specific physical locations of the disk devices, such as Cylinder 2, Head 3, Sector 5.

So, the easiest place for BIOS to find our OS is in the first sector of one of the disks (i.e. Cylinder 0, Head 0, Sector 0), known as the boot sector. To make sure that the "disk is bootable", the BIOS checks that bytes 511 and 512 of the alleged boot sector are bytes 0xAA55. If so, the BIOS loads the first sector to the address 7C00h, set the program counter to that address and let the CPU executing code from there. This is the simplest boot sector ever:

Note that, in the above boot sector, the three important features are:

So, BIOS loops through each storage device (e.g. floppy drive, hard disk, CD drive, etc.), reads the boot sector into memory, and instructs the CPU to begin executing the first boot sector it finds that ends with the magic number. This is where we seize control of the computer.

The BIOS program will transfer control of the PC to a program called a bootloader. A bootloader loads an OS, or an application that runs and communicate directly with hardware. To run an OS, the first thing to write is a bootloader. Here is a simple bootloader.

We compile the code with nasm and write it to a bin file:

Let's try it out:

On some systems, you may have to run qemu-system-x86_64 boot_sect_simple.bin If this gives an SDL error, try passing the --nographic and/or --curses flag(s).

You will see a window open which says "Booting from Hard Disk..." and nothing else. There you go, a simple boot loader is ready!

To summarise the control flow of the boot process:

4. If error occurs, print a message to notify users something went wrong and halt.

To print Hello World! on the screen, we need to tell the BIOS to print these characters for us. But how does BIOS know how to do that? And where does BIOS store these characters at? It does it with a fundamental mechanism of the computer called interrupts and registers.

Interrupts are a mechanism that allow the CPU temporarily to halt what it is doing and run some other, higher-priority instructions before returning to the original task. An interrupt could be raised either by a software instruction (e.g. int 0x10) or by some hardware device that requires high-priority action (e.g. to read some incoming data from a network device).

Each interrupt is represented by a unique number that is an index to the interrupt vector, a table initially set up by BIOS at the start of memory (i.e. at physical address 0x0) that contains address pointers to interrupt service routines (ISRs). An ISR is simply a sequence of machine instructions, much like our boot sector code, that deals with a specific interrupt (e.g. perhaps to read new data from a disk drive or from a network card).

So, in a nutshell, BIOS adds some of its own ISRs to the interrupt vector that specialise in certain aspects of the computer, for example: interrupt 0x10 causes the screen-related ISR to be invoked; and interrupt 0x13, the disk-related I/O ISR.

However, it would be wasteful to allocate an interrupt per BIOS routine, so BIOS multiplexes the ISRs by what we could imagine as a big switch statement, based usually on the value set in one of the CPUs general purpose registers, ax, prior to raising the interrupt.

Just as we use variables in a higher level languages, it is useful if we can store data tem- porarily during a particular routine. All x86 CPUs have four general purpose registers, ax, bx, cx, and dx, for exactly that purpose. Also, these registers, which can each hold a word (two bytes, 16 bits) of data, can be read and written by the CPU with negligible delay as compared with accessing main memory.

0x0e on ah tells the video interrupt that the actual function we want to run is to 'write the contents of al in tty mode'.

We will set tty mode only once though in the real world we cannot be sure that the contents of ah are constant. Some other process may run on the CPU while we are sleeping, not clean up properly and leave garbage data on ah.

For this example we don't need to take care of that since we are the only thing running on the CPU.

Let's compile the code with nasm and write it to a bin file:

You can examine the binary data with od -t x1 -A n file.bin

Your boot sector will say 'Hello' and hang on an infinite loop.

There we go, we just wrote a boot sector in assembly language. All operating systems start this way and then pull themselves up into higher level abstractions (e.g. higher level languages, such as C/C++/Go/Rust).

In the next tutorial, we will see how a stack is implemented and how we can load programs into the bootloader from memory/disk.