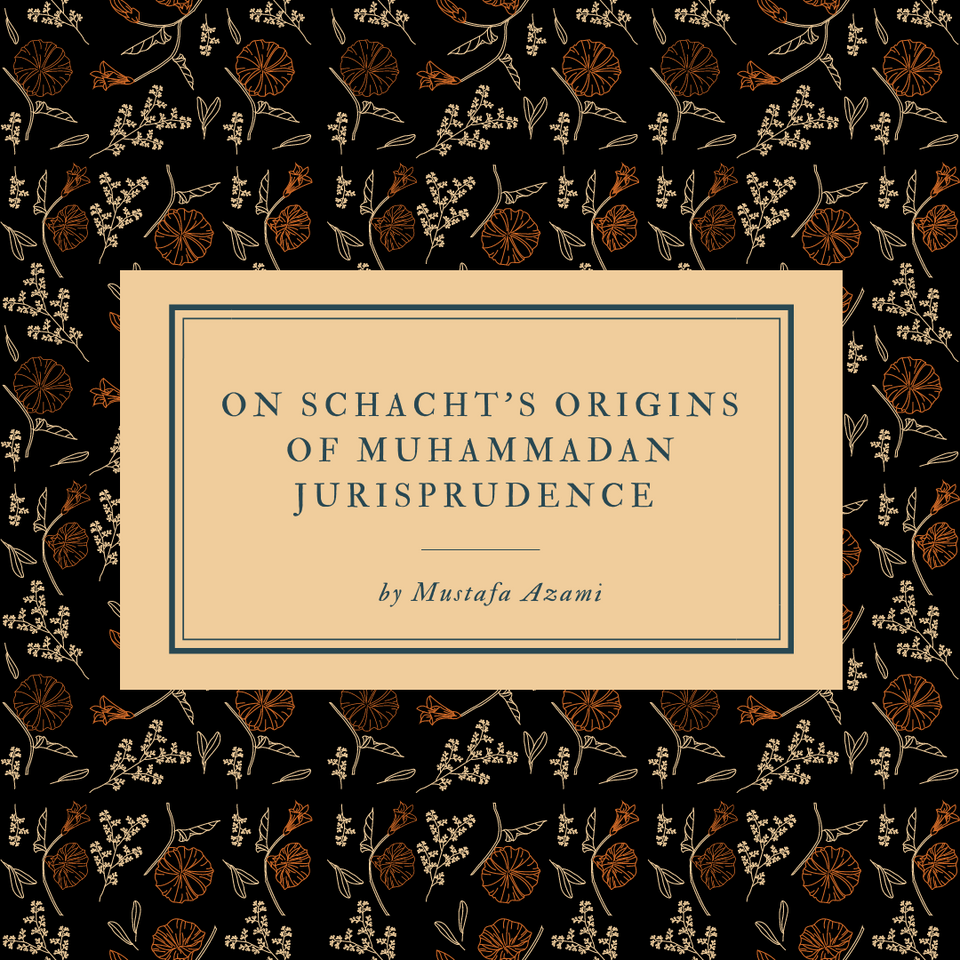 Go to the Amazon Page (US | India) for details and reviews.

This in-depth study presents a detailed analysis and critique of the classic Western Orientalist (people who study Islam and represent it in a stereotyped way by trying to point out the fallacies in it) work on the origins of Islamic law, Schacht's Origins of Muhammadan Jurisprudence. Azami's work examines the sources used by Schacht to develop his thesis on the relation of Islamic law to the Qur'an, and exposes fundamental flaws in Schacht's methodology that led to the conclusions unsupported by the texts examined. This book is an important contribution to Islamic legal studies from an Islamic perspective.

The book is divided into two parts.

The first part, which is divided into two chapters, Mustafa Azami discusses Schacht 's views on law (Shariah) and it's place in Islam in the light of the specific injunctions laid down in the Qur'an. It is shown that, in theory at least, law did not fall outside the sphere of religion and that the Prophet created a distinct legal system which was in use in the first century A.H..

The second part is divided into six chapters.

Chapter 3 deals with the early concept of the sunnah.

Chapter 4, discusses Schacht 's thesis that the ancient schools of law considered the generally agreed-on practice - the "living tradition" - more authoritative than traditions from the Prophet.

Chapter 5 cites examples from the writings of the time to show that the ancient schools of law, far from being resistant to the surma of the Prophet, in fact based their decisions on it on their best knowledge.

Chapter 6 is a critical study of the examples Schacht adduces in his attempt to show how what he calls the fabricated sunnas of the Prophet imposed themselves on the original idea of surma, and how the ancient schools of law. having been defeated by the traditionists. began to project their own doctrines into the mouth of the Prophet.

Chapter 7 consists of a detailed discussion of the examples produced by Schacht in defense of his theory that the entire hadith literature was an invention of the second and third centuries.

In Chapter 8 there is a similar discussion of the examples Schacht uses to impugn the validity of the isnad system. It argues that he failed to understand the difference between the way isnad was quoted in the sirah and Fiqh-hadlth literature and its use in hadith literature.

1 . Law (Shariah) as such fell outside the sphere of religion. The Prophet did not aim to create a new system of jurisprudence. His authority was not legal. As far as believers were concerned, he derived his authority from the truth of his religious message; skeptics supported him for political reasons.

2. The ancient schools of law, which are still the major recognized schools today, were born in the early decades of the second century AH By sunna they originally understood the "living tradition" (ai-'amr al-mu/tama'alaih), that is, the ideal practices of the community expressed in the accepted doctrine of the school of law. This early concept of sunna, which was not related to the sayings and deeds of the Prophet, formed the basis of the legal theory of these schools.

3. These ancient schools of law gave birth to an opposition party, religiously inspired, that falsely produced detailed information ab- out the Prophet in order to establish a source of authority for its views on jurisprudence.

4. The ancient schools of law tried to resist these factions, but when they saw tiiat the alleged traditions from the Prophet were being imposed more and more on the early concept of surma, they con- cluded that "the best they could do was to minimize their import by interpretation, and to embody their own attitude and doctrines in other alleged traditions from the Prophet" that is, they joined in the deception.

5. As a result, during the second and third centuries All it became the habit of scholars to project their own statements into the mouth of the Prophet.

6. Hardly any legal tradition from the Prophet can, therefore, be considered authentic.

7. The system of isnad ("chain of transmitters"), used for the authentication of hadith documents, has no historical value. It was invented by those scholars who were falsely attributing their own doctrines back to earlier authorities; as such, it is useful only as a means for dating forgeries.

Chapter 1 deals with the place of law (shariah) in Islam, quoting extensively from the Qur'an to show that it was indeed part of the Prophet's function and duty to create a new system of law, that it was an accepted principle that the Prophet was authorized by Allah to legislate, and that his own behavior formed a model for Muslim society.

Schacht's central contention is that law as such fell outside the sphere of religion. He further maintains that Islamic law did not exist at all during the greater part of the first century ah. A fundamental methodological error committed by Schacht is that he appears to have virtually ignored the evidence of the Qur'an itself, as far as legalistic injunctions are concerned, in the formulation of his thesis.

This chapter shows that the injunctions from the Our'an were reflected in practice, and that there were systematic Islamic legal activities throughout the first century A.H.

In his Introduction to Islamic Law, Schacht says:
1) "The first caliphs did not appoint Qadis (Islamic Judges),".
2) The Umayyads "took the important step of appointing Islamic judges or Kadis.".
This leads him to conclude that "during the greater part of the first century. Islamic law, in the technical meaning of the term (shariah), did not as yet exist."

Mustafa Azami refutes this saying that in the first century AH, judges were appointed, legal codes were drawn up, and legal literature did make its appearance all providing evidence that Islamic law did exist from the time of Prophet himself. The evidence on which these assertions are based are presented in three sections;

- The judicial activities of the Prophet;
- Legal codes and judgments based on the Prophet's judgments or examples
- Legal literature in the first century A.H.

The judicial activities of the Prophet;

Mustafa Azami cites several examples showcasing the judicial activites of the Prophet. An interesting point was

Much valuable information about the Prophet's own judgments can be derived from the writings of the fifth-century Spanish scholar, Ibn Talla' [404-497 AH]. In his book Aqdlyat Rasulillah {Judgements of the Prophet]* he collected cases reported in a variety of reliable sources which were compiled mostly in the second and third centuries. The book is by no means exhaustive, but it contains sufficient judgments made by the Prophet to give a clear indication of the importance of his judicial activities.

Many examples of our Prophet sending judges to different towns and provinces were presented, some of the companions name being:

A further indication of the significance attached to judicial activities in the first century has been men by listing judges of just one city, Basra in Iraq. Some of the notables one being:

Interesting examples were mentioned in this part, a few them were:

Some references to actual books and writings have have been listed. For example:

Although these examples of first-century legal works by no means form a comprehensive list, they do show that there was much legal literary activity going on in various parts of the Muslim world at the time. Schacht's theory of Islamic law originating in the early second century would thus appear untenable.

In the second part of this article, I'll inshaAllah mention the notes on Mustafa Azami's reply that Schacht was equally incorrect about the early bases of Islamic law.